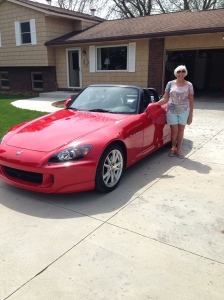 It’s been dang near 2 months since I posted on this site.  Here’s some stuff to catch you up on whats been going on in my wacky life this summer.

Let’s start around the first of May when I went temporarily insane and bought a little red sports car.  Yup, a 2005 Honda s2000  Just like the one Sam bought when he was temporarily insane out in Washington.  We called his illness a “Midlife Crisis”.  I knew the universe was speaking to me when the guy I bought the car from knew Sam, it was the same color and year as Sam’s and only had 28,000 miles on it.  It has been the highlight of my summer and am planning on selling it next spring.  Fun’s fun, but let’s not get  carried away.  I mean two cars?

A couple of weeks later I decided to dip my toes into the on-line dating pool.  (Son, you may want to stop reading here.)  I have been out of the dating scene, if you will, for quite a while and things are so different it’s stupid.  Tinder, E Harmony, Plenty Of Fish, Match.com, Our Time.com, you name it, I’ve been on it.  Just trying to figure out if there are better sites than others.  No, not really, is the answer to that one.  The men still make all the decisions as to whether you meet or not.  To me if a guy likes your picture or winks at you there is interest.  Not so much…I have changed my profile umpteen times, because casual, dating and fun all mean SEX in guy-speak.   All the guys on E Harmony want a soul mate, Tinder is for Hook-ups (sex), POF isn’t too bad, met a guy from East Lansing that had a thing for older women, (don’t ask) and one who just wanted to give me a massage..for the love of God, I don’t want someone I haven’t met yet to talk about touching my body.  Then there was Michael from East Grand Rapids on  Tinder who was nice and met me for coffee here in Kazoo.  I saw him twice before I found out he was just trying to get over his 20 year old girlfriend (he is 51) who left him.   I kid you not, as Jack Parr would say.   I will leave this subject by admitting I don’t get excited anymore when I have an email about a match.

Of course this wouldn’t be a blog post if I didn’t mention my journey with grief.   After 3+ years, I am finally realizing that I need to forgive myself for being the last spouse standing, if I am ever going to start living again.  I have been so busy trying to gird myself against the pain of the loss, that I am not able to appreciate all that is going on around me.  I am merely walking around from place to place trying not to think about how much I am hurting.  To do this, I will make peace with Sam’s memory, apologize one last time for all my shortcomings during his illness.  As he would tell me often, “Theresa, that is water under the bridge” or “That’s a sunken cost” when I came home with another purse or pair of shoes.  I know it sounds absurdly simple, but he would be the first person to tell me that it needs to be done so I can join the human race again.  It is not going to happen overnight, but it is a goal worthy of me and all who are going through an unimaginable loss which is part of life.  So every time I begin to feel guilty about the past I will think of Sam’s smile, or laugh, or the way he looked at me and our family with pure love.  It is a tough road but we have to give ourselves a break and some of that love we are missing.  Peace Out

One thought on “The Summer of Sixty Five”