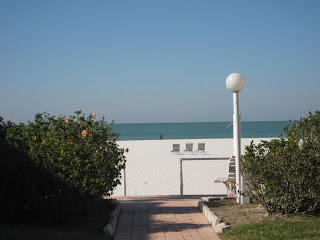 It all began with a Facebook post from my friend Donna stating that she was lifting her self-imposed moratorium on winter vacations.  When she asked if anyone wanted to go with her, I immediately said hell yeah.

She now lives in Philadelphia and I am in Chi-town, so we met at the airport in Tampa.  Upon meeting up we did the dance of joy and went to get my bag.  After that we headed to the car rental place where I picked up the car I rented for $12 a day on Priceline.com and the guy tried to up-sell me to a Chrysler 200 for only $7 more a day.  What part of budget vacation did he not understand?  Hello, Priceline.com……  Saying no thank you for the third time he gave me the keys and told me what bay it was in.  Did I mention I rented an economy car?  When we got to the car, I thought about the old Gremlin commercial, “Hey toots, where’s the rest of you car?”  “It’s a freaking clown car!” I blurted out. 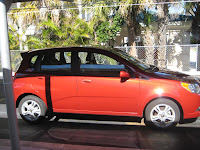 We put the back seat down and shoved the luggage in the back and headed for Siesta Key.  Just before we got there we had to stop at the grocery store for a few provisions.  $150 later we were once again standing outside the car wondering how the groceries were going to fit in, but our heroic bag boy saw to it, refused a tip from Donna (who almost took him to the ground) and we were once again off.

By the time we reached Casa Mar, it was dark.  My instructions for picking up the key was to get it from the gold mail box.  So because I was driving, Donna went to get it.  “I can’t find any gold mail box.” she said, so we circled the complex once, twice, three times until we spotted a young man who didn’t really look like he belonged there but what the hell.  Turns out his name was Joe and yes indeed he did work there in maintenance.  He led us to the mailbox, we got the key and proceeded to #10 condo.

We both were so tired after unloading the car and putting the groceries that we didn’t bother pulling the Murphy bed down and just fell asleep on the couches.

Donna quickly realized I was an early riser.  I got up and went to fix us some coffee.  When I saw the pot, I didn’t know what to think.  Well I did think that the owners of the condo did not have a grasp on the two individuals they had rented to.  Swear to god, it was a four cup Mr. Coffee.  You know the ones they have in motel rooms that fill two styrofoam  cups if you are lucky.  Well the coffee cups they had were ginormous.  It took a pot to fill the cup.  We must have used 12 coffee filters the first day. THAT, was tedious.

Fast forward to Sunday night.  We were coming back from the beach when the guy next door started a conversation with us by calling us “chatter boxes”.  Now bear in mind that Donna and I have not seen each other in almost two years, so we had a lot of things to talk about at the pool that afternoon.  Evidently Mr. New Jersey (that’s where he haled from) thought he was being cute, while we just found him annoying.  But he was old so we cut him a little slack.  Back inside for some “red eyes” (beer and clammato juice) and more conversation.

Crescent Beach is beautiful with its stunning white sand.  We happened to luck out having the best weather of the season so far, but it still was a little cool.  We soaked up the sun everyday, hit the pool and walked the beach a lot.  Donna liked watching the sunset every night.  It was a little cool for me most nights.  We ate out a couple or three nights and cooked on the grill the rest of the time.  I had crab legs for the first time.   I am such a big fan of Deadliest Catch, I should have some Opillio for old times sake.  Donna and I both love that show.  It was happy hour so I had a couple of Bloody Marys and Donna had a “dirty” Martini.

I think it was Wednesday when we decided to do a little laundry.  There was a nice laundromat at the condo so Donna trucked down and put the wash in.  I went down to check it and put in the dryer.  That night we went to dinner at The Old Salty Dog in the downtown Siesta Key area.  That place had the best Mojitos and I also had some fish and chips.  Yummy  It was during dinner that Donna mentioned she had washed the clothes without soap because there wasn’t any there.  “I thought the whites were a little dull when I pulled them out.” I said.  On that note I ordered another Mojito.  There was a definite lack of supplies that you would normally find at a vacation rental. 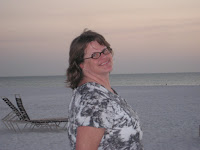 The people down there have one speed….slow.  But we were on vacation, so we were in no hurry to get anywhere.  All in all we had a great time.  A lot of girl talk, a lot of drinking and a lot of fun.  I am hoping we can do it again as the time went all too quickly.