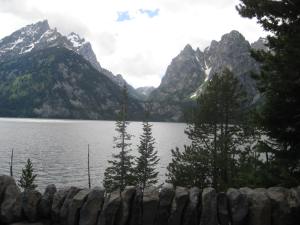 As we headed back west from our visit to Michigan,(after I let go of the car bumper in an effort to keep us there), I decided to make the best of it and pay special attention to the scenery along the way.

By the time I had whipped myself into shape, we were in Iowa. This is America’s food belt where life is simple. Huge grain silos tower over family farms, announcing their existence from miles away. Wildflowers grow neatly along the roadside. Iowa seems a proud State. Proud of what they have and what they contribute to our nation.

We had an ambitious schedule for the first day, 1200 miles. (Are these people nuts? The answer is affirmative.) While speeding through Nebraska, I noticed lots of livestock. What I couldn’t see, I could smell. Some think the State is boring and flat, but it is green and fertile and the further west we drove it became more rolling and hilly.

Wyoming is where a lot of our energy comes from. The land is barren high desert, but below the earth lie rich pockets of oil and natural gas. The landscape is dotted with pumping stations and towns named after the oil companies. I have to admit every time we passed a Halliburton truck, it gave me an uneasy feeling, and I thought of Dick Cheney and nearly lost my breakfast. At the Bitter Creek rest area we ran into a prairie dog town. I love prairie dogs. They seem to be the clown princes of the animal kingdom.

As we diverted from our route going out, we headed toward Jackson, Wyoming. I fell in love with the forests and mountain streams as we made our way to the Grand Tetons.
Ranches dotted the landscape and made a body wonder how they survived when the harsh winters came. (My guess is snowmobiles). It would be a great place to write.

Without a doubt the highlight of our trip was Grand Teton National Park. The majestic mountains stood like sentries among the lush landscape. Only God and the force of nature could have created this awe inspiring sight. We headed to Yellowstone thinking we would see lots of wildlife, but they must have had the day off as we only saw one Bison, two River Otters, and a couple of Elk. (We did catch a Moose bathing in a lake next to the highway in Montana.)

Our next stop was Old Faithful. The earth seemed a giant boiling pot and the steam made the air hazy and smelled a bit like sulfur. We arrived about an hour early for the eruption, so we went to the Old Faithful Lodge and had a supper of Bison meatloaf, mashed potatoes, etc. and were done in time for the show. I was a bit underwhelmed when the geyser finally went off. I don’t really know what I expected, but it was something more than what we got.

Moving on, we drove through Idaho which is gorgeous, (except for where mining has ruined the landscape and polluted the rivers), and into eastern Washington. When we had to make the decision of going home through Oregon or Washington we chose Washington. It is only a two lane road, but the Columbia Gorge is a sight to see, and it is best viewed, we found, traveling WA-14. There are times the road takes you at least 1000 feet above the river and the scenery is spectacular. Lewis and Clark took this route to the Pacific so there is a lot of history here.

When we arrived home we thanked God for a successful trip and for the beauty he arranged for us that, most of the time, everyone takes for granted. It was a spiritual journey that brought us joy and enriched our lives.